This area was completely uninhabited between the 11th and 12th centuries, because of above all the  dense vegetation still visible today (Riserva delle Pianelle) and which hid only a few caves used as a refuge, even for brigands. Under the Normans it became the property of the Abbey of Santa Maria del Galeso, founded in 1165 by Baron Riccardo, returning from the second crusade, who built a church dedicated to the Madonna. The same was then consecrated by Bishop Gerardo in 1169 who gradually grew in size and functions. But the turning point came under Archbishop Angelo who ceded the church and its possessions to the Cistercian monks so that they could found an abbey and then also reclaim the adjacent areas. In 1195 a colony of white monks from the great abbey of Sambucina (in the Crati valley in Calabria) creates the abbey of Santa Maria del Galeso. The Galeso, it should be emphasized, is one of the smallest rivers in the world. Just under a kilometer long and just 0.5 meters deep on average, it was considered a “magical” river. Not for its alchemical characteristics, but for the suggestion it gave to the visitor. In fact, it flows in an area completely devoid of other waterways, like a “miracle” of nature and along its path it has shaped nature, differentiating it from the typical environmental context. The river has been a source of inspiration for many poets, such as the Latin Orazio Flacco (who wished to return in his last days), the Mantuan poet Virgilio, who composed his “Eclogues” here, (who described its blue colored waters “painted” from a native seaweed). Even the Greek historian Polybius, in the “Res Italicae” wrote how the Tarantini, who in all respects felt like the Spartans, called the river “Eurota”, in memory of the river that ran through the city of Sparta. The river can be visited near the Nasisi station in Taranto. What better place to found an abbey?

This grew and managed to acquire lands and possessions scattered throughout the territory, including the woods on the hills, useful both for procuring timber and for grazing. Territory initially shared with the Abbey of Santa Maria di Crispiano.

Today it is possible to partially see the small church of the Galeso Abbey near the junction between the SS 172 for Martina Franca, coming from Ponte Punta Penna.

The life of the Abbey was not prosperous for a long time, in fact it had to sell (probably due to lack of monks) its possessions among various other owners, such as the Duke of Martina (the “Monti del Duca” district can also be found today) and other barons and then, in the following centuries, the lands were further subdivided and divided, sold or transferred, to other noble families of the province. However, it was the great families of Martina Franca who managed to grab a large part of the possessions that belonged to Santa Maria del Galeso (Turnone, De Carolis, Magli, De Siati and many others) as well as to some religious orders or parishes (the Carmelites above all). Some of these possessions, already from the sixteenth century, possessed a pre-existing residential and settlement nucleus (fortified nuclei, often gathered around a well, a spring or a cave-chapel, as previously seen with the presentation of the farms). Others remained in their natural state, with wooded vegetation and dedicated to grazing or agriculture. Among the latter we find the lands called “Galeso X”, belonging to the hilly area between Martina Franca and Crispiano and almost all of which ended up in the employ of the De Carolis family.

Over time, the De Carolis family split into several branches. One of these branches owned a farm and several plots of land, including an estate called “Li Russoli”, which included a farm with huts, pantries, warehouses and surrounding land, and other lands called “La Morte” and “Caselle “. Precisely the latter is identifiable with the land currently occupied by the Parco delle Querce, which in the seventeenth century probably had no agricultural or stable settlements of some interest. In the Bourbon land registry, dated 1742-1748, however, we find well mentioned the site of “Caselle” which, according to the register at the time, was the property of a priest from Martina, a certain Donantonio De Carolis, who had inherited the possessions of his family linked to the territories associated with the “Galeso X” compartment. The site of Caselle was described at that time as a “settler’s home” and its toponymic origin derives from the presence of the “Casedde” or a house consisting of trulli that we can therefore date as a building between the end of the 17th and the beginning of the 18th century, with adjacent land and an extension of “Tomoli 100”.

The trulli are exactly like those currently visible and which form the restaurant of Parco delle Querce.

The measurement of the original area of ​​the “Caselle” estate should not make you turn your nose up because the unit of measurement of Tomolo, in the Taranto area, was by far one of the most overestimated in southern Italy. The “national” average was about 2150 square meters for Tomolo, while in Taranto a Tomolo corresponded to a good 6,813 square meters. of land. Therefore, the site of Caselle (or of Parco delle Querce) in the eighteenth century had an extension of over 680,000 square meters, almost all consisting of woodland vegetation. To find more information on the woodland property and on the activity of the “casedde” it is necessary to refer to the Murattian land registry of 1820. For the record, with the Napoleonic advent and with the government of Murat, congregations, monastic orders and the feudal system,which in some areas of Italy was still present, were suppressed. Therefore the Caselle estate passed into the property of two brothers, namely Donato and Antonio Caroli, from Martina Franca. Now the doubt is clear: is the surname Caroli the post-Bourbon evolution of the De Carolis family? The roads are inaccessible, also because both surnames are still very common in the heel of Italy today. But it is strange how the name “Donantonio” gave life in the register following “Donato” and “Antonio”, among other things also a double name which often referred to the same person and which was very common in the city since the 15th century. Let’s leave the doubts of this enigma between the lines.

After the Caroli property, registered in the land registry of 1820, after twenty years the site of “Caselle” passed into the hands of Martucci Nicola, also from Martina Franca, and the site was registered as a “rustic house and home”. This testifies to how Caselle had been inhabited for some time now, regularly and permanently, and yielded an annual income to the State 198.75 Ducati. At the turn of the nineteenth century and the early twentieth century, the estate passed into the hands of the Colucci family. They restored the eighteenth-century trulli and arranged the external area, then giving the estate its name. Their ownership did not last long because the Santoro family, also from Martina Franca, took possession of Caselle. Very ancient and noble family with important roots. In fact, the progenitor was the notary Eustachio Santoro, active in the 18th century. His son, Michele Santoro was also one of Martina’s most important figures. He is remembered as a chemist, pharmacist and army captain. Michele Santoro became so influential that from 1848 to 1850 he was deputy mayor of Martina and in 1868 he was appointed commander of the national guard, particularly active against banditry.

The Santoro family therefore managed to keep the Caselle property until the nineties of the last century. The last owner was an Eustachio Santoro, a name of  the tradition. Even with the Santoro family, the property was recognized with the name of “Colucci”, which can be found in some papers of the cadastral archive of the Municipality of Crispiano and also in the book “The Hundred Masserie di Crispiano”, although it is also identified in brackets with the name of “Caselle-Serri”, from the name of the locality. To tell the truth, the district of “Caselle” is for toponymy that of “Grotte Comiteo”, a name taken from the homonymous Masseria that contains a cave inside, used over time as a food warehouse and which is located a few meters further up mount from the Parco delle Querce.

But returning to the historical reconstruction of the site after Eustachio Santoro, the estate ceases to be a farm (in fact it seems that the specialty of Caselle was the breeding of horses and mules) to become a tourist-accommodation center. In fact the property passed into the hands of the brothers Cosimo and Francesco Patronella who with a limited liability company built the current Parco delle Querce structure, restoring the original trulli (the external well with drinking trough still visible today) and creating an aquatic park, a large banqueting hall with roof in solid wood beams, a hotel and using the trulli as a restaurant inside the hotel. After a flourishing and successful period, the Parco delle Querce suffered a slow decline from 2015 to 2018.

In 2019 the property was acquired by the big Martinese entrepreneur Stefano Scatigna who in two years restored all the premises and redeveloped and put the whole area back on track. 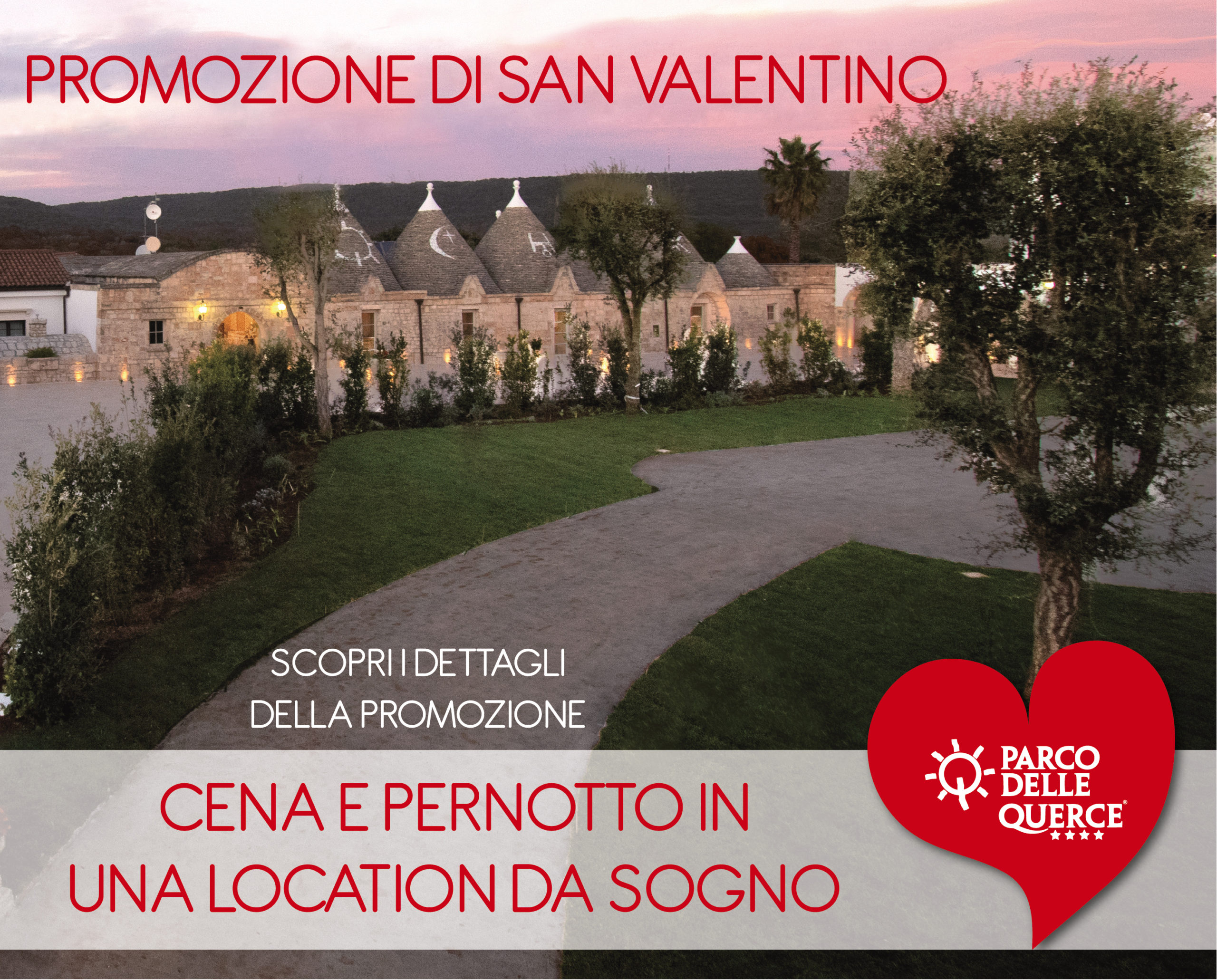